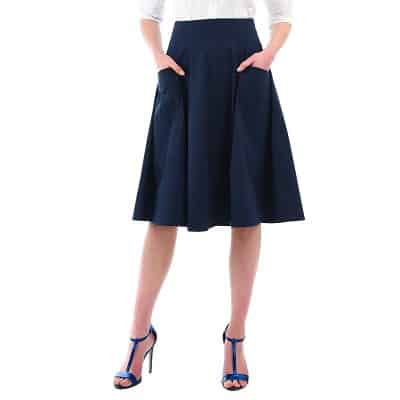 Our daily workwear reports suggest one piece of work-appropriate attire in a range of prices. This is the kind of skirt that a few years ago would have looked totally frumpy, but like yesterday’s trousers, the more voluminous bottom is speaking to me right now — and call me crazy but I love the big pockets in these, which remind me of Oscar dresses more than, say, Lucy Ricardo, for some reason. In any event: eShakti is always fun because you can customize so much of the design — here you can choose a ton of different skirt lengths, customize all of the waist/hip measurements (or choose a size from XS-6X), and (gah) remove the pocket, should you want to. The skirt is $39, and available in navy, brown, purple and yellow, with some colors on sale. Ah, and it’s machine washable. CARGO POCKET COTTON POPLIN SKIRT Looking for more bespoke clothing? Check out our roundup of the best made-to-order workwear. This post contains affiliate links and Corporette® may earn commissions for purchases made through links in this post. For more details see here. Thank you so much for your support! Seen a great piece you’d like to recommend? Please e-mail [email protected]