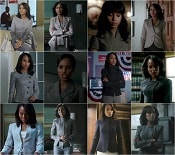 How do you feel about Olivia Pope’s clothes on Scandal? Let’s discuss her character’s fashion choices! (It has been eons since we did a 360 Review — if you’re not familiar with them, our reviews examine a fictional “professional” woman’s attire and critique the wardrobe from all perspectives: underling, boss, friend.) Readers have been fans of Scandal for years, but I am late to the party — after this clip on sexism in politics made the rounds (and seeing Kerry Washington’s awesome appearance on SNL, including the parody of “What’s the Fox Say?”) I finally invested the appropriate amount of time to binge watch the first three seasons. New episodes start on February 28 (eee! yay!), so now seemed like a great time to discuss. Two more miscellaneous notes before we begin:  a) I’m still disappointed that the love of her life is the bad guy from Ghost — not my favorite actor or character, and b) The New Yorker recently had a short fictional story about Olivia Pope helping Chris Christie, which hilariously nails the more absurd lengths to which the plot’s been taken lately. But ANYHOO: Fashion. Let’s talk. 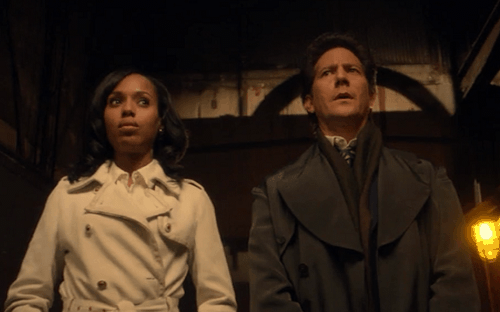 The first time that we as viewers meet Olivia, she’s already a big deal — we know from the first few minutes of the show that the mere mention of her name has made a potential hire stop breathing; her interviewer jokes that she would “kill puppies for this job.” Her first outfit shot is this white trench: gray trousers, white trench, white blouse. This is a big trend for Olivia Pope — she often wears very light colored outfits, even more impressive considering the only food we ever see her really consume on a regular basis is red wine. Some thoughts: As her boss: Ha! Olivia Pope has no boss. (In a fairly great speech, she even yelled at the President (of the United States) that he should “earn her.”) Let’s assume she has some superiors, though — I would think she looked great. As her equal: Ha! Olivia Pope has no equals. Still, let’s assume she does — if I were working at the same level as her in a job I would probably be a little/lot jealous, unless I also had impeccable hair and the ability to effortlessly maintain the whiteness of  white trenches. My opinion of her would probably be a bit that she was a princess — a woman who takes cars everywhere and does not do the heavy lifting. As her underling: I’d be in awe of my boss’s impeccable hair and effortless, all white/gray/beige wardrobe.

No one messes with Olivia Pope’s coat collection — it is almost as varied (and expensive) as her bag collection. This “pearl” pink coat from Ferragamo — which actress Kerry Washington allegedly hated at first because she thought it was too girly — is one of her iconic looks. But is it a good one? As her boss: I wouldn’t think too much about a pale pink coat, honestly — it looks amazing with her skin tone. The off-the-shoulder drapey thing would make me wonder, but it doesn’t seem to inhibit her movement, and actually looks kind of great over a blazer (in the first picture). As her colleague: Seething hatred. Flames! Flames, on the side of my face. I can barely get to work without spilling coffee on my black coat and she’s prancing around in a pink off-the-shoulder coat? Are you kidding me? As her underling: I would live in awe of my boss and her perfect pink coats. Unless she was mean to me, in which case I would probably mercilessly mock her OCD habits behind her back — if I dared. 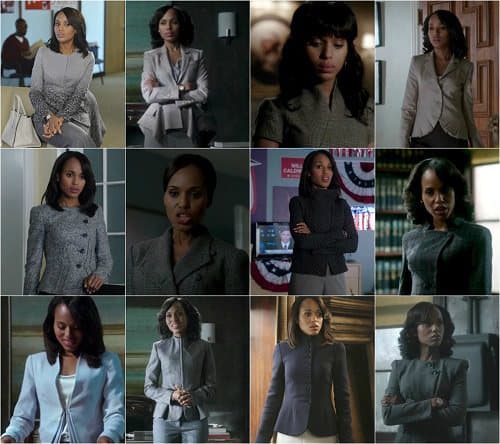 OK. If I’ve seemed slightly critical of her wardrobe, it’s just my snarking on her impeccable white/gray/beige wardrobe. In reality, this show is a fashion bonanza — particularly for blazers.  She has an extensive, fun, fashion forward blazer collection — she wears things with a vintage vibe, she wears things with a military vibe, she wears things with fun button/pleating/peplum details — and it’s a joy to see her in them. I’m sure the average price of each of the above blazers is $1000, but I still think this idea — in spirit — is something that every woman can use for inspiration for her own working wardrobe. (Hat tip to The Vulture.) Boss, Colleague, Underling: She looks amazing and professional. 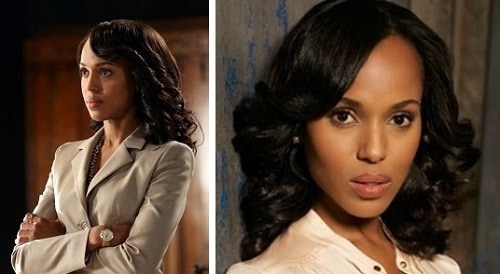 In my mind, here is how we know that she’s truly a character instead of a person: her hair is too perfect. How many hours a day does this woman spend with her curling iron? (Hat tip to BlogHer, which has an entire “Olivia Pope weave history.”) (Update: And I’m going to take out my comments on “professional women don’t spend three hours each day on their hair,” since some readers are taking the comments in a really wrong way, which makes me think I’ve written it poorly and picked a poor time to introduce the topic. My apologies to anyone I offended.) That’s my $.02 — what do you guys think of Olivia Pope’s fashion? Do you agree with me that it’s just a leeeetle bit too perfect — or do you think it’s something to which you can realistically aspire? Which blazer is your favorite? What story line are you most looking forward to seeing when episodes start again? (L-#)