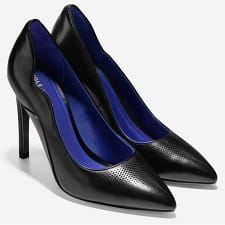 I was in the Cole Haan store recently and could not get over how flexible and lightweight these Antoinette heels are. Note that they’re 4″ — but if you really want the height and you want a lightweight shoe, do give these a try. The size range is 5–11, and while Amazon has some in stock, Cole Haan is your best bet if you want more choices. The shoe is on sale there, from $400 to $199.95, in six colors. Antoinette Grand Pump

Pssst: Check out our Guide to Comfortable Heels for other reader favorite brands!