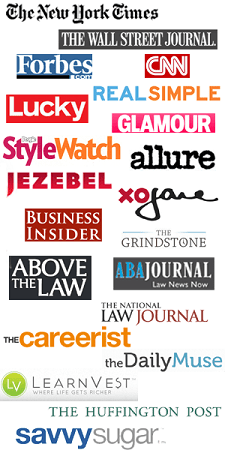 Corporette® has been called the “go-to source” for professional but fashionable women, and was #2 on Forbes’ list of the Top 10 Lifestyle Websites for Women. The site has been recognized by the ABA Journal as one of the “Top 100 Blawgs” for five years in a row, and made Forbes’ list of the Top 100 Websites for Women for all four years the list was in existence.  In 2016, we were honored to win the bronze medal for “Website of the Year” for The Stevie Awards for Women in Business. And way back in 2009, we were happily surprised to be nominated for a Bloggie for “Best-Kept Secret Weblog.” We’ve been honored to receive mentions in The New York Times, CNN/Oprah.com, Real Simple, The ABA Journal, The National Law Journal, Forbes, Above the Law, Business Insider, The Muse, Jezebel, Bustle, Mic, Refinery29, Quartz, Lucky Magazine, Fashionista, People StyleWatch, Glamour Magazine, Allure, Working Mother magazine, the Wall Street Journal’s Law Blog, the Wall Street Journal’s “The Juggle” blog, Law.com’s Careerist Blog, The Huffington Post, LearnVest, and more.

« Guest Posting Guidelines and Suggestions
Hire Kat to Speak! »
Back to Top