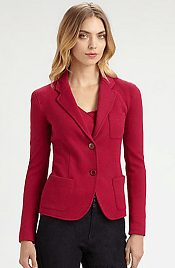 Happy Monday! I like this shrunken blazer from Armani Collezioni — the textured jersey is a very interesting, almost waffle-knit pattern. I like. More importantly, for discussion purposes: how do we feel about the model’s overall look — the monochromatic look on top with a black pant on the bottom? I feel like it’s a classic look but one that I’ve only seen on older women — but I’m not quite sure why. I do kind of wish they’d styled it with another color instead of black, though — perhaps a dark gray, or maybe even the right shade of brown. Readers, what are your thoughts? The jacket is $1395 at Saks. Armani Collezioni Tile Jersey Jacket Seen a great piece you’d like to recommend? Please e-mail [email protected] (L-2)