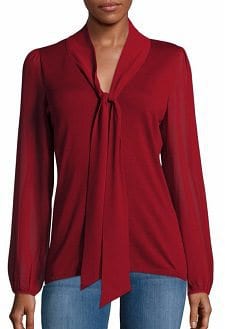 This bow style of top comes and goes, and right now it seems to be having a moment. I think this is one of the times where it looks good, and I even like the bishop sleeves. This is sort of an affordable, interesting piece that will be really versatile in your wardrobe — it’s different, but not too different. The top is in a cotton/modal blend and is hand washable. It’s $29, marked down from $60, at Saks Off 5th. August Silk Tie-Front Solid Top

Here’s an option that’s available in petite and plus sizes (as well as regular).