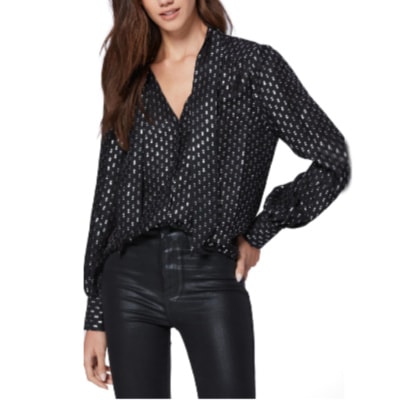 Normally, I’d caution against wearing a metallic-print blouse in the office, but I think this one is subtle enough to pull it off. The silver doesn’t look too disco-ball-esque against the black fabric, and the cut of the blouse is pretty classic-looking. This would look great with a charcoal suit in a formal office, or with a black blazer and jeans in a more casual setting.

The blouse is $249 and available in sizes XS–L at Nordstrom. Cleobelle Silk Blouse

Two more affordable options are from CeCe and Banana Republic.

« Coffee Break: Crystal Nail File
Some of the Top Things Readers Bought in October 2019… »
Back to Top