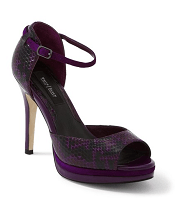 This is definitely a “know your office” kind of shoe, but if you can get away with a 1″ platform as well as a fairly wide peep toe, I think these purple heels are gorgeous.  Love the snake-embossed leather, the suede accents, and it’s my favorite shade of purple.  They’re $118 at White House|Black Market, which not only has a lot of purple accents this season, but also apparently has a totally redesigned shoe collection. Amethyst Snake-Embossed Heel

« How to Announce Your Pregnancy At Work
Wednesday’s TPS Report: Asymmetrical Neckline Belted Sheath Dress »
Back to Top