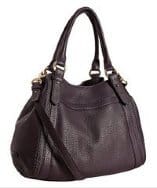 Bluefly has a number of great bags on sale for up to 40% off, including Cole Haan and Kooba. I’m liking this dark purple satchel from Cole Haan — it’s a great “starter” color if you’ve typically worn neutral purses, and the pebbled leather is super soft and easy to wipe clean. As with all Cole Haan bags, this one has interior patch pockets for your technology, as well as a leather bound zip pocket. Was $395, now $237 at Bluefly. Cole Haan dark aubergine leather ‘Village II’ small satchel