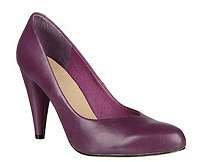 How do we feel about Steve Madden shoes?  I’ll admit that I wore them almost exclusively in my early 20s, but I haven’t really tested the waters since.  But:  hello, purple pump, highly rated on the Steve Madden site, and at a great price:  $35 (was $90).  Limited sizes only, alas (even more so for the other colors, black and “cognac”).  Knoyzz Pump