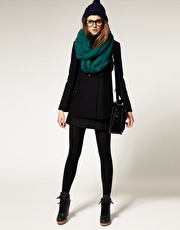 Hmmn: I’m kind of loving the idea of a snood right now. It’s a scarf! It’s a really chunky necklace! It’s a cowl neck! It can even be pulled down and worn around your shoulders, a bit like a wrap/shrug. Asos has a nice looking one in a variety of fun colors, including a lovely dark green (pictured), a red, a bright yellow, a dark caramel, and a beige. Prices range from $14.38 to $21.56. ASOS Loose Rib Knitted Snood (L-2)