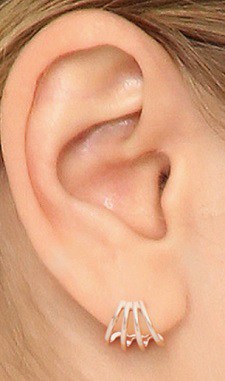 As I’ve noted before, I’ve always thought huggie earrings were the most comfortable to wear at work — they’re so close to the ear (hence the name) that you sidestep the “is it appropriate for work” issues you sometimes get with dangly earrings, but with more of an interesting look than you often find in stud earrings. These rose gold earrings (with a post closure, alas) look gorgeous, with just a bit of an edge to them. They’re on a great sale, too — they were $495, but are now marked to $346. (Nice! There’s also an almost-sold-out diamond version of this earring for $795.) Pictured: EF Collection Multi Huggie Earrings

« When to Announce Your Pregnancy to Your Clients
Frugal Friday’s Workwear Report: 7th Avenue Split-Neck Popover Blouse »
Back to Top