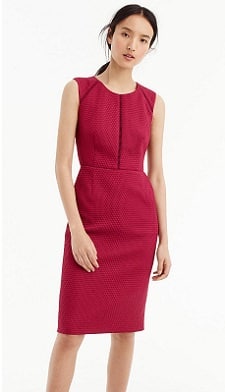 We’ve featured J.Crew’s best-selling Portfolio dress before, I’m sure, but something about this deep berry color is calling to me — lovely. For springtime I’d pair it with white and pink accents, or pale blue. (The dress is also available in black and “misty twilight,” sort of a cornflower blue.) It has great reviews and is $148 in classic (000–16), petite (00–12), and tall (2–16) sizes. Portfolio Dress

« Workwear Hall of Fame: Grosvenor Place Shoulder Bag
How to Get the Most Out of Your LinkedIn Profile »

« Workwear Hall of Fame: Grosvenor Place Shoulder Bag
How to Get the Most Out of Your LinkedIn Profile »
Back to Top