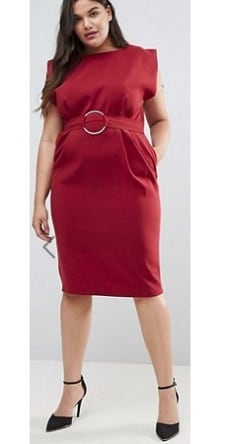 Someone told me recently that ASOS Curve is really great — as is this dress we’re featuring from them — and I’d love to hear from readers who agree: What have been your good finds? Is there anything in particular that you regularly buy? This dress has pockets, which I really like, and I also like that the belt doesn’t go all the way around. It’s a flattering and forgiving style, and it comes in lots of sizes and colors, including tall and straight sizes (and a mini dress as well). The dresses are $46 (sale) to $76. ASOS CURVE Split Cap Sleeve Midi Dress with Modern Ring Belt

If you are interested in plus size workwear, please sign up for CorporettePlus, our newsletter! Signing up helps us gauge interest in the project, and we promise not to blast your email more than once a week at most. (Right now it’s more like once a month.)

« Suit of the Week: Boss
Sexual Harassment, Office Culture, Resumes, and “Boys Being Boys” »
Back to Top