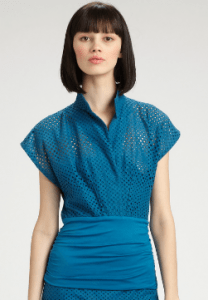 Hello: love this blouse. Admittedly, the color is half of it — I have an entire wall of my bedroom painted this color — but it’s the little details that I love the most: the interesting shape to it, the stand collar, the hidden placket, the cotton eyelet. I’d wear a black camisole under this, or perhaps (perhaps) a dark purple camisole. It’s $795 at Saks. Akris Punto Cotton Cummerbund Blouse