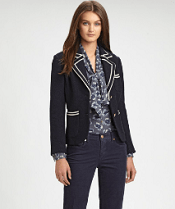 Wow. Take notes, ladies: this is how you do a contrast trim blazer. Love the fact that the trim is just on the lapels and pockets, not on the bottom hem of the jacket — and I love the shrunken, feminine fit to the jacket. It’s $450 at Saks Fifth Avenue. Tory Burch Wool Amara Blazer Seen a great piece you’d like to recommend? Please e-mail [email protected] (L-2)

« Kat’s Top 10 Labor Day Sales (and 16 others worth checking out)
Open Thread: What Do You Shop For On eBay? »

« Kat’s Top 10 Labor Day Sales (and 16 others worth checking out)
Open Thread: What Do You Shop For On eBay? »
Back to Top