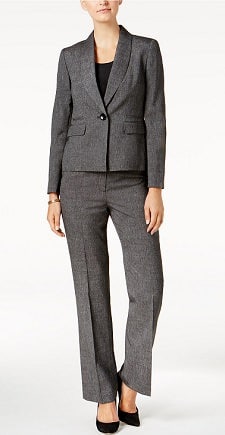 Boy, there are not a lot of affordable suits out there right now. Halogen used to be a reliable source, but they don’t seem to have anything right now. Limited was another option, but their operations have been on hold for a while (their fall collection will be here in “days,” their site says). So today I’m featuring Le Suit, which has been around for years and is one of the brands that tend to sell the entire suit at once. That can be a problem if you need separates for sizing reasons, but that said, this is pretty much the only time you’re going to find an entire suit for such an affordable price online — $99 at Macy’s. (I’ve found suits in stores for as low as $60.) I like the button, the pocket details, and the fact that the pants don’t have cuffs or pleats; it’s a very simple, basic suit. This would come in handy if you need to keep something in your office to change into at the last minute, or if you’ve got an interview and you usually don’t wear a suit. It comes in petite sizes 2–16 and straight sizes 4–18, and with a little tailoring it would be great — unless you’re one of those lucky people who can wear a suit like this off the rack. It’s also available in plus sizes 14W-24W. Le Suit One-Button Pantsuit