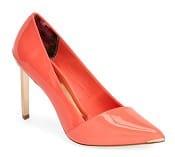 These pointy-toed heels look lovely — I love the brightly colored coral (pictured) and the sharp metallic accents. The shoe also comes in a pretty pink, a black suede, and a black patent leather version — they’re all part of the big Nordstrom sale that just started. The pumps were $190, but are now marked to $132. (They are not on sale at Zappos, but I always find the video of the Zappos model walking in the shoe to be super helpful for determining whether I like it — for example, I didn’t realize the vamp was asymmetrical until watching the video.) Ted Baker London ‘Naretta’ Pointy Toe Pump

In admin news: my apologies for all the video ads, you guys. I’ve removed all of the ads I could find on the back-end (I know I have to get the one at the footer of the page still) and I’m also coordinating with the various ad companies involved in selling the ad space on this blog. Sigh.

« Should You Say No to Sports at Work?
Frugal Friday’s TPS Report: Split-Neck Cotton Dress »

« Should You Say No to Sports at Work?
Frugal Friday’s TPS Report: Split-Neck Cotton Dress »
Back to Top