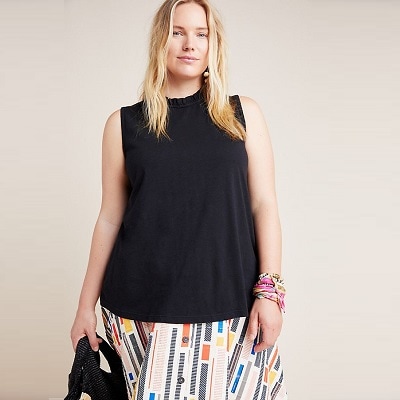 I love an inexpensive, non-polyester top! This 100% cotton, ruffled top looks like it could be a versatile wardrobe addition. These types of necklines can be a styling challenge — I think it would work nicely with a crewneck cardigan for the office, or on its own with a pair of jeans on the weekend. This top comes in standard sizes XS–XL, plus sizes 1X–3X, and petite sizes XSP–XLP. It’s available in three solid colors (black, white, and red) and three patterns (grey flowers, yellow flowers, and white striped) and is $38–$48 at Anthropologie. Theia Ruffled Top