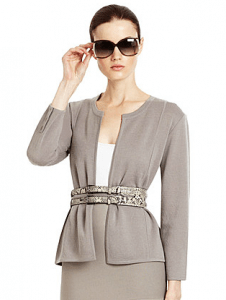 Lord & Taylor seems to have a number of great sales going on right now — including this great wool jacket from BCBGMAXAZRIA. Available in black and “cinder” (pictured), I love the collarless look and the bracelet-length sleeves. Although it comes with a sash belt tie built into the waist, I believe they’ve styled it with an additional animal print belt on top here — looks great, though. The jacket was $198, now marked to $138.60 at Lord & Taylor. (There is also a promo going on to take an extra 20% off all sale and clearance; I’m not sure if the jacket is included in the sale or not.) BCBGMAXAZRIA Adaline Wool Jacket Seen a great piece you’d like to recommend? Please e-mail [email protected] with “TPS” in the subject line. (L-0)

« Coffee Break – Bugle Knot Necklace
Tales from the Wallet: Thoughts on Buying Property »
Back to Top