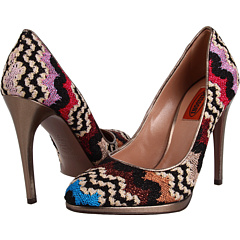 Zappos has a number of good deals going, including up to 40% off a good selection of Stuart Weitzman

. These stunners are the perfect office shoes, if only because they’re totally impractical for wearing outside.  I like the classic shape, and the fact that they’re just a leetle bit wild — perfect for a casual day at the office. I’d order them now and wear them for a house party on New Year’s Eve, and then take them in to work to wear with pencil skirts, sheath dresses, and more. They were $525, but are now marked to $289.99. Missoni – SM10 VAR G 992 (Multi) – Footwear

« Another 10 Sales to Check Out…
More Sales – Sephora, ASOS, Ann Taylor, CUSP, Tory Burch, and more… »
Back to Top