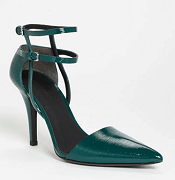 Sigh. Gorgeous, gorgeous shoe — and oh so on trend. Current trends seen in this shoe: emerald (color of the year), “single sole” (no platform), ankle strap (they’re everywhere!), pointed toe (they’re ba-ack), and — just so you can’t pull out any pointy-toed, ankle-strapped shoes you may still have from a few years ago — that straight-across-the-toes vamp. I love the vibrant green and the textured leather, as well as the 3.5″ height, which is pretty walkable. The shoe is $545 at Nordstrom. Alexander Wang ‘Emma’ Pump (L-3)

« How to Look Professional in Flats — All the Time
Frugal Friday’s TPS Report: Linen Cardigan »

« How to Look Professional in Flats — All the Time
Frugal Friday’s TPS Report: Linen Cardigan »
Back to Top