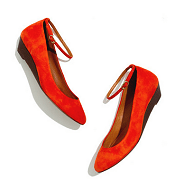 Mini wedges have been in for a few years, and ankle straps are the “must have” for spring — and I don’t think you’ll find as nice a mixture of them both as you will with this ankle strap mini wedges from Madewell. I particularly like that the ankle strap is removable, and that it comes in some great colors. (My favorite is the modern orange, pictured, but I also really like the gray, violet, peacock, and “bronzed treasure“.) They’re $118. Madewell’s Ankle Strap Mini Wedge