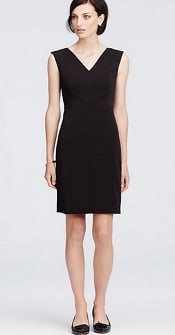 Happy hump day, ladies! I like the wide straps and interesting seaming details on this sheath dress from Ann Taylor. It’s lined, has an invisible zipper, and is available in regular and petite sizes 00-18. Booyah! It’s $169, full price (online only). Ann Taylor Triacetate Sheath Dress

Here are a lower-priced alternative and two plus-sized options.

« Coffee Break: Convertible Backpack
Previously, on Corporette… »
Back to Top