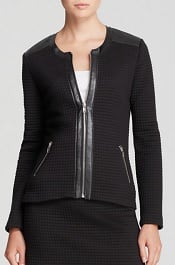 I’ve eyed this soft jacket with faux leather trim a number of times, and think I’ll finally post it — it looks like a great addition to a work wardrobe or a weekend wardrobe. It’s $108, and available in sizes XS-L. AQUA Quilted Jacket with Faux Leather Trim

« Suit of the Week: Armani
How to Organize Your Office »

« Suit of the Week: Armani
How to Organize Your Office »
Back to Top