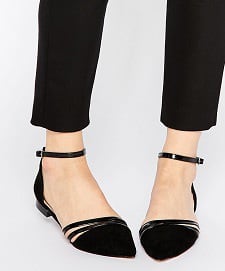 ASOS has so many cute, affordable ballet flats (some in wide sizes, too), it’s kind of crazy. I’m always a fan of strappy ballet flats, and it’s nice to see that they have them aplenty. I just got my first pair of shoes from them (ahem), and while I wouldn’t call them “comfortable,” I would say that they’re wearable, and no worse than any other shoe that starts at that price. Pictured: these simple black flats are $38, with a few lucky sizes in stock. ASOS Lifestyle Pointed Ballet Flats

Here’s a narrow option in black.

Psst: I’m also in love with this pair, this one, and this one.

« 10 Ways to Make Time for Friends When You Work a Lot
Wednesday’s Workwear Report: Ribbed Sweetheart Neck Top »
Back to Top