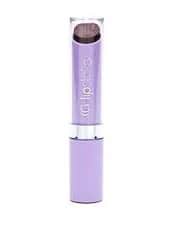 We have a lot of different lip products — lipsticks and glosses, some sticky, some matte, some that stay put, some expensive, some cheap — but this $5 drugstore brand has been the constant in our purse for about 20 years now:  CoverGirl Lipslicks Lip Gloss.  Our favorite color is ‘Edgy’ — a plummy mauve on us — but we’ve tried a lot of the colors and like them all.  (Some other faves: We would say that “Hipster” is more akin to a reddish stain — a bit darker than Benetint — and “Bronze Goddess” is a bit of a taupey/brown tint.)  We like the product for a lot of things that it isn’t:  It isn’t sticky.  It isn’t shiny.  It doesn’t wear unevenly.  It doesn’t end up on your teeth.  It doesn’t smell or taste weird.  It isn’t too thick or heavy, the way some other tinted glosses are — a simple swipe of this moisturizes your lips and adds a hint of color; use a few more swipes for a deeper color.  And the fact that the product has been around for so long, we think, says a lot about it.  (The only thing that it lacks is SPF, alas.)  It’s $3.99 at Drugstore.com.   CoverGirl Lipslicks Lip Gloss, Edgy