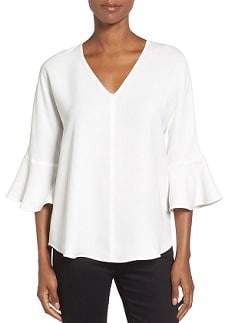 Bell sleeves for work: yea or nay? I must admit I like the longer, fingertip–brushing sleeves the best, but if those feel a bit too romantic/boho/hippie for work, these shorter versions are an easier, milder way to do the trend. This pretty top from Pleione is only $64, available in three colors XS-XL, and is hand washable. (They have a similar sweater version with a boat neck for $49, too.) Pictured: Pleione Bell Sleeve V-Neck Top

« Suit of the Week: Ellen Tracy
Do You Boycott Companies Because of Your Beliefs? »

« Suit of the Week: Ellen Tracy
Do You Boycott Companies Because of Your Beliefs? »
Back to Top