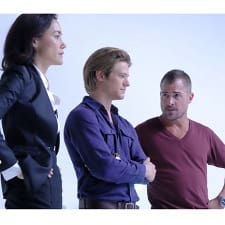 Since we’re all getting back into the swing of things after the long weekend, I thought we’d have a fun open thread today: what new TV shows are you looking forward to this fall? What second, third, and beyond seasons are you eagerly awaiting? What shows are you so glad you’ve caught up with via streaming services like Netflix, Hulu, or Prime — and have you seen any great documentaries or movies lately? (Here’s another great question: for those of you who love to binge watch things or tie TV-watching to workout time — what are your favorite shows?) Do you put limits on your TV watching (e.g., no more than 7 hours per week, only on the treadmill)? (Cord cutters / those without a TV, I’d love to hear from you too — how’s it going?)

For my $.02: With two small kids and limited grown-up/unscheduled time outside the house, we almost never go to movies in theaters — the last time I can remember going was when I saw Gone Girl by myself the week it opened… oh and of course we saw The Force Awakens the week it opened. So almost all of my picks will be TV-based! For new TV, I just set my TiVo to record (links go to the official trailers on YouTube):

I’m excited for the return of:

In terms of movies — the last few I saw that I really liked were Joy, The Martian, and the Tony Robbins Netflix documentary, I Am Not Your Guru (really interesting documentary, but is it just me or did he “help” every woman in the audience by bringing every complaint/challenge back to daddy/boyfriend issues?). I just saw The Intern and liked it a lot more than I thought I would. I’m excited about but haven’t seen the new Star Trek movie or Bad Moms, and I’m looking forward to Girl on the Train and Rogue One. Recent(ish) movies I plan to watch when I get a moment: Whiskey Tango Foxtrot, and Weiner.  Even though they got horrible reviews, I’d still like to see The Huntsman and The Boss. (Did you know that Rotten Tomatoes now lists “top streaming movies” as a separate category?)

Obviously I’m not into scary/monster shows (I’ve heard great things about Stranger Things, but I don’t think it’s for me — even some Dr. Who episodes kept me up at night) — and my tastes run more for comedy/procedural/over the top drama — but that’s me.  Over to you, ladies — what TV are you excited about this fall? Any new movies you’re looking forward to coming out?