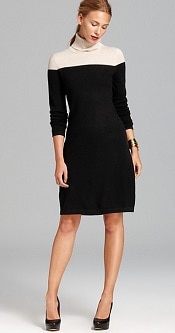 Bloomingdale’s is having some pretty steep discounts — this simple yet fun color-blocked turtleneck dress has been on my watch list for a few weeks now, and it’s at the lowest I’ve ever seen it, $159 (originally $228; the sale runs through 11/17).  The dress is available in sizes XS-XL, and in heather oatmeal/black (pictured) as well as winter white/dark charcoal. C by Bloomingdale’s Cashmere Color Block Turtleneck Dress