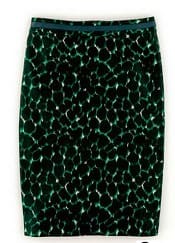 I can’t help it, I love this green and black skirt. It’s a great color, it’s fun, and (to me, at least) it didn’t register as “green leopard!” until I saw Boden describe it that way. It was $88, but is now marked to $52.80. Boden Printed Cotton Pencil Skirt

For a plus-size alternative, here are a couple of pencil skirts with interesting prints.

« Tech Problems
Gift Guide: For the BFF »
Back to Top