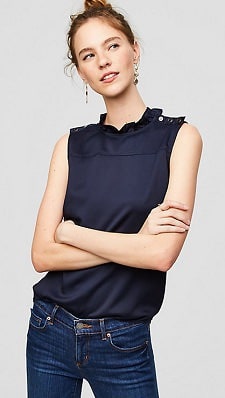 This satin shell from Loft looks really cute, in part because of the little ruffled neckline, which I like for layering purposes. It’s a great way to make a crewneck sweater, for example, look a little more feminine — and a layered look is usually a little more put-together in general. We’re picturing the blouse in navy but it also comes in “whisper white.” It’s available in regular and petite sizes, and although you might not expect it to be, it’s machine washable. The top is $49.50. Button Shoulder Satin Shell

Did you known that Loft Plus is coming later this month? It’ll offer sizes 16–26. But since it’s not here yet: You can find plus-size options for this top at Bloomingdale’s and Lord & Taylor.