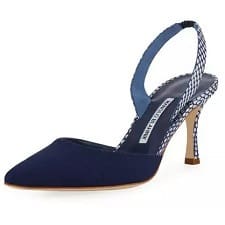 This Manolo Blahnik pump looks perfect — in fact, I don’t know if a pump can get more perfect than this. I love the snakeskin trim, the covered stiletto heel (2.8″), the pointed toe, and the halter slingback strap. I think it’s classic and fun at the same time. Minor detail: It’s $735 — but then, it’s Manolo Blahnik. It’s available in sizes 5–12 at Neiman Marcus. Carolyne 70mm Fabric and Snakeskin Halter Pump

Tough act to follow, but if you’re looking for something more affordable, Violeta (by Mango) has a faux snakeskin slingback. Also, right now Bergdorf’s has a Manolo slingback pump with a snakeskin buckle that’s reduced from $765 to $535.