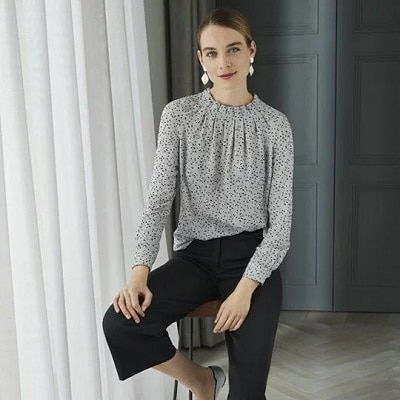 The combination of the pleated neckline and dotted print on this shirt is just the right level of whimsy for me. The muted color palette keeps it on the right side of business casual. I would wear this with a black blazer and a bright pencil skirt or with a black or dark charcoal suit.

This blouse is $245 and available in UK sizes 6–16. The Fold usually charges $25 to ship to the U.S., but if you use the code FREEDEL through Nov. 19, you’ll get free shipping. Charfield Blouse Grey Dotty Viscose

Some more affordable options are from Mango and Michael Michael Kors (straight sizes) and NYDJ (plus sizes).