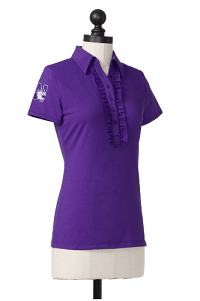 I’m not really a “raa raa” kind of girl, but: for those of you who actually do have some team spirit for your college or grad school teams, check out Meesh & Mia.  They have merchandise for more than 100 schools and universities, and  they actually do have a ton of cute items, from ruffled polos to faux wrap tops to stylish cardigans and dresses.  For today’s coffee break I’m liking the ruffled polo, which I think would be a great way to support your team.  This top is $48 at Meesh & Mia.

« Back to School: Juggling A Full Time Job … and Courses
Wednesday’s TPS Report: Textured Belted Dress »
Back to Top