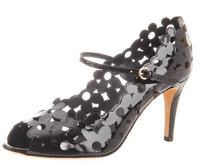 At first I thought these shoes had cutouts to resemble polkadots — but really, they’re made entirely of patent leather flowers. (Daisies, I believe; flowers are not my strong point.) No, the pumps are not for everyone, but I think these could be a great way to accessorize a casual day at the office. They’re $475 at Endless. Moschino Cheap and Chic Women’s Ninfea 1 Pump