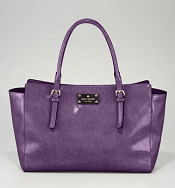 Hooray for crinkled patent leather tote bags in “deep African violet.” And animal print lining! I wish this bag came with a leetle bit more organization inside it (a pocket for my cell phone, perhaps) but sometimes you just want a big space to throw stuff. Gorgeous. This baby is on sale, too — was $348, now marked to $233 at CUSP (available in both purple and “chino”). Kate Spade New York Zuma Beach Kelsey Shoulder Bag (L-3)

« What to Wear to Pump at Work: Tips for Nursing Moms
Frugal Friday’s TPS Report: Sivan Gathered V-Neck T-Shirt »
Back to Top