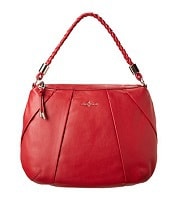 Boring, sure — but sometimes all you want is a great red bag. I like the size of this one and the braided strap, and like I’ve said a million times: I love Cole Haan bags for lasting, quality bags that wear incredibly well. This one was $348, but is now marked to $192 at 6pm. Cole Haan Adele Hobo