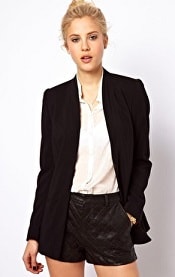 This fluid blazer from ASOS is not usually my style (to say nothing of the, ah, quilted leather short shorts), but something about the blazer is calling to me.  It just looks effortlessly cool but professional, and looks like a great basic black blazer to keep in your office.  AND, it’s on sale: was $103, now $82; it’s also available in white, still full price and almost totally sold out.  ASOS Premium Blazer with Longline Lapel

« Suit of the Week: Gianni Bini
Summer Work Clothes: How to Look Professional When It’s Hot »

« Suit of the Week: Gianni Bini
Summer Work Clothes: How to Look Professional When It’s Hot »
Back to Top