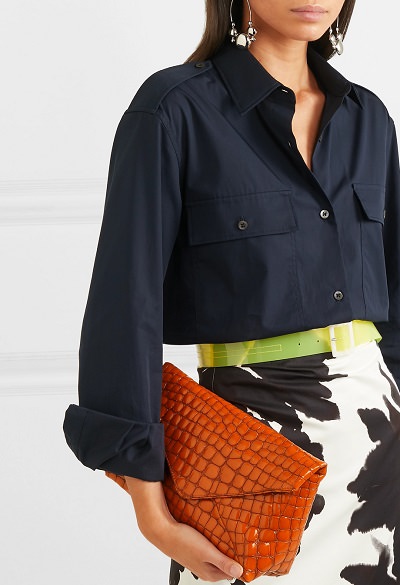 I usually think of clutches as dinnerwear, but sometimes a fabulous clutch comes along that you can envision a fabulously stylish CEO or the like casually taking it out of her bigger tote and heading off to for a lunch meeting with it. I would put this one in that bucket — the orange is unusual but not crazy (it also comes in yellow!) and I like that it’s got a magnetic closure on the flap and a zipper in the back. (All of the “croc effect” pieces Net-a-Porter has from Dries van Noten are kind of fabulous — there are shoes and belts as well.) The pictured clutch is $820. Croc-Effect Patent-Leather Clutch

« Screen Time and You: How Do You Limit Your Screen Time?
Frugal Friday’s Workwear Report: Side Pleat Top »

« Screen Time and You: How Do You Limit Your Screen Time?
Frugal Friday’s Workwear Report: Side Pleat Top »