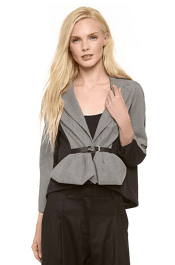 I’m not a big fan of the styling here (those pants! and give the model a sandwich!) but this avant-garde jacket from David Szeto seems really promising. It’s unusual, interesting, and very artistic — but it still reads like a blazer to me, and I could see this working for a casual day for a power player in a conservative industry, or for a big meeting/important day for a power player in a creative industry. The blazer is $1,385 at ShopBop. David Szeto Belted Peplum Jacket