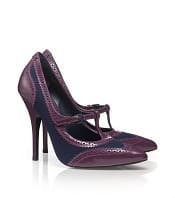 I included Tory Burch in my roundup of sales (1 and 2), and I added a few of the things I’ve already recommended to the Corporette Bargains page… but I’m seeing such great sales at the Tory Burch website I thought I’d do a deal roundup. As a reminder, you can take an extra 25% off sale with code JUSTFORME through 1/2 — and you get free shipping on orders of $300 and more. TONS of cute shoes and bags (albeit in some very limited quantities)… here are a few of my favorites, below. (Hover over them for price info.)  Pictured: Everly High Heel Pump, was $425, then $297, but with code JUSTFORME it comes to $222.