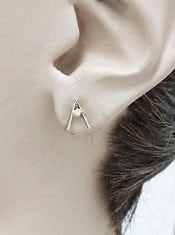 Pretty! I like the teeny tiny diamonds in these small gold triangles — they look chic yet classic at the same time. They’re $331, available at Ylang 23. WWAKE Diamond Triangle Earrings (L-2)

« How to Be Productive When You Work in an Open Office
Frugal Friday’s TPS Report: Textured Peplum Jacket »

« How to Be Productive When You Work in an Open Office
Frugal Friday’s TPS Report: Textured Peplum Jacket »
Back to Top