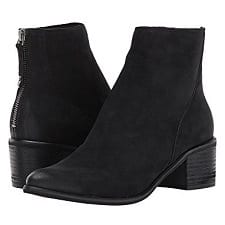 These boots are highly rated and look great — especially in black, which would go really well with tights, but also in the gray and taupe. I like the slightly pointed toe and the simple zip up the back. They come in sizes 6–13 and are on sale at Zappos, from $140 to $96. Note that Amazon has lucky sizes and colors as low as $50! Dolce Vita Cassius