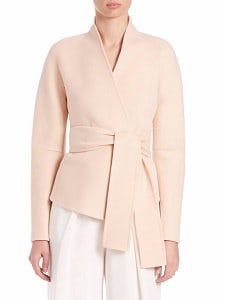 This cashmere felted wrap coat in blush looks Olivia Pope-worthy, and perfect for chilly spring weather for years to come. I love the wide belt, and — hello, sale! It was $3300, but is now on sale for $1700ish. Donna Karan Felted Cashmere Wrap Coat

Two lower-priced options for wrap coats are here and here, and here’s a plus-size alternative.

« Weekend Open Thread
The Most Comfortable Ballet Flats, For Work and Beyond! »

« Weekend Open Thread
The Most Comfortable Ballet Flats, For Work and Beyond! »
Back to Top