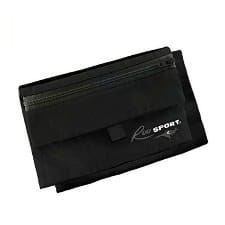 If you, like me, are always looking for some place to put your stuff when you go to the gym or go for a run, then do consider these RooSport running pouches. The idea is that it adds a pocket to athletic shorts where there is no pocket. I haven’t tried one yet, but I think I’m going to have to pull the trigger — I don’t mind walking or running with my keys and iPhone in my hand, but when I go to the gym I’m constantly losing my stuff as I move from one weights area to another. There are a bunch of different types; they’re all under $30 at Amazon. RooSport 2.0 Magnetic Running Pocket

« The Most Comfortable Ballet Flats, For Work and Beyond!
Tuesday’s Workwear Report: Jodee Sheath Dress »

« The Most Comfortable Ballet Flats, For Work and Beyond!
Tuesday’s Workwear Report: Jodee Sheath Dress »
Back to Top