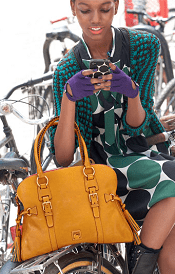 I hate the color “mustard.” I really do. So you know I must really be in love when I say that I’ve been eyeing this mustard yellow bag for a few weeks now (although it’s also available in black, orange, and a tan “natural”). I love the dome shape, the buckles (both on the sides and the front of the bag) and the well thought-out pockets and key fob (as usual with D&B). It’s $398 at Nordstrom. Dooney & Bourke Domed Buckle Satchel