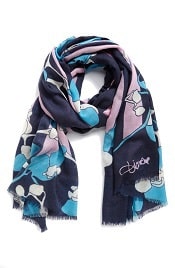 I got my MIL a Kenley cashmere scarf for some holiday last year, and have been eyeing them ever since — I was really impressed with the softness of the cashmere, and the brightness of the colors. I also like that it’s a bold, DVF pattern, but one that fits you no matter what size, and doesn’t need to be laundered as frequently as a dress or blouse. In other words: a great gift. The Kenley is a perennial style from DvF; this navy/orchid/light blue one is lovely. It’s $250 at Nordstrom. Kenley Cashmere Scarf

« How to Respond to a Good Bonus
Frugal Friday’s TPS Report: Seamed Pencil Skirt »
Back to Top