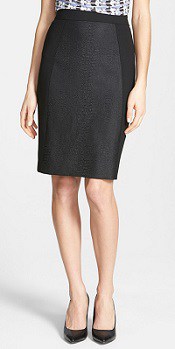 Nordstrom has a ton of stuff on deep discount (lots of lucky sizes, but a lot of great stuff).  For today’s TPS report, I’m liking this black combo seamed pencil skirt from Halogen — the bit of texture looks interesting and fun, while the black colorblocking on the side is flattering but not obvious (as some readers have noted, sometimes colorblocking look like a bad version of those bikini t-shirts).  The skirt was $69, but is now marked 60% off to $24.97.  Halogen Seamed Pencil Skirt