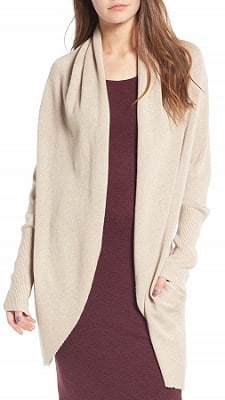 This circle cardigan from Leith is getting awesome reviews, and would be great as a light topper for a casual office (or a casual day at a conservative office). I like it as styled here, with a dress, but it obviously works well with skinnier pants for work and leggings and jeans for the weekend. The sweater is available in four colors, and was just marked down from $75 to $45. Easy Circle Cardigan

« Suit of the Week: Banana Republic
Previously, on Corporette… »

« Suit of the Week: Banana Republic
Previously, on Corporette… »
Back to Top